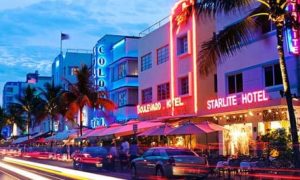 Hostel prices – A night in a 6-bed dorm costs about $25. A private room starts around $100 per night. Most hostels include free linens, free towels, free WiFi, and many offer free breakfast. The Jazz Hostel,  Freehand, and South Beach Hostel are the best three in the city.

Budget hotel prices – You can find a room in a budget hotel starting around $70 per night. Hotels at this price point typically include private bathrooms, air-conditioning, a TV and free WiFi. On Airbnb, shared rooms start around $25 per night and entire homes start around $50 per night.

Average cost of food – If you are in the South Beach area or any of the restaurants on the strip, you should expect to pay at least $20 a meal. But, go away from the main area, and you will be able to eat for half of the price. As elsewhere in America, there are a ton of fast food options for less than $7. In Little Havana, you’ll find delicious Cuban food for less than $10. If you cook your own food, expect to pay $50 per week for groceries that will include pasta, vegetables, chicken, and other basic foods.

Transportation costs – It may take a while, but Miami’s extensive public transportation system will get you to where you need to go. Both the bus and the metrorail cost $2.25 per trip. Uber operates in Miami with a base fare of about $1 and it costs $1 per mile and is way cheaper than a taxi!

Suggested daily budget – $60-90 (Note: This is a suggested budget assuming you’re staying in a hostel, eating out a little, cooking most of your meals, and using local transportation. Using the budget tips below, you can always lower this number. However, if you stay in fancier accommodation or eat out more often, expect this to be higher!)

Top Things to See and Do in Miami

One thought on “Miami Travel Guide”