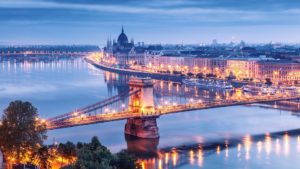 Budapest’s beauty is not all God given; humankind has played a role in shaping this pretty face too. Architecturally, the city is a treasure trove, with enough baroque, neoclassical, Eclectic and art nouveau buildings to satisfy everyone. Overall, though, Budapest has a fin de siècle feel to it, for it was then, during the capital’s ‘golden age’ in the late 19th century, that most of what you see today was built.

The Past at Hand

They say the past is another country, but it’s always been just around the corner in Budapest. Witness the bullet holes and shrapnel pockmarks on buildings from WWII and the 1956 Uprising. There are sad reminders like the poignant Shoes on the Danube memorial, but ones, too, of hope and reconciliation – like the ‘sword’ of the former secret-police building on Andrássy út now beaten into the ‘ploughshare’ that is the House of Terror, with both sides of the story told.

There’s a lot more to Hungarian food than goulash, and it remains one of the most sophisticated styles of cooking in Europe. Magyars may exaggerate when they say that there are three essential world cuisines: French, Chinese and their own. But Budapest’s reputation as a food capital dates largely from the late 19th and the first half of the 20th century and, despite a fallow period under communism, the city is once again commanding attention. So, too, are Hungary’s excellent wines – from Eger’s complex reds and Somló’s flinty whites to honey-sweet Tokaj.

The city is blessed with an abundance of hot springs. As a result, ‘taking the waters’ has been a Budapest experience since the time of the Romans. The choice of bathhouses is generous – you can choose among Turkish-era, art nouveau and modern establishments. Some people come seeking a cure for whatever ails them, but the majority are there for fun and relaxation – though we still maintain it’s the world’s best cure for what Hungarians call a macskajaj (cat’s wail) – hangover.