The Balkan Peninsula lies in Southeastern Europe and is home to the countries comprising former Yugoslavia, Albania, Greece, and Bulgaria. Culturally, ethnically, and geographically diverse, Balkan travel can be an incredibly fun, fulfilling, and challenging experience.

For the purposes of this Balkan travel guide, we will be concentrating on travel in the countries of former Yugoslavia, Albania and Bulgaria. While Greece lies geographically in the Balkans, culturally it is largely its own separate entity (with the possible exception of the North of the country) and deserves its own guide.

While easily one of our favourite regions in Europe, Balkan travel can pose challenges that much of the Schengen area countries have managed to eliminate. There are many things to take into account when travelling to this lesser-visited area of Europe — including border crossings, transportation, language, and religion — so we have created this comprehensive Balkan travel guide in order to make sure your trip to this incredible region is as enjoyable and hassle-free as possible! 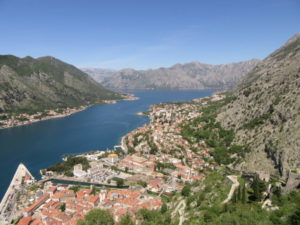 In summer of months from July to August, beaches are packed with Europeans on vacation, however, this is a good time to visit if you want to experience one of the many festivals that take place during the season.

If travelling between December to March, this is a good opportunity to experience world class skiing in the Balkans at a fraction of the cost of Western European countries.

One of the most important tips when travelling the Balkans is that it can be difficult to exchange local currency when you leave the country, so try to not withdraw large amounts of cash. This is particularly an issue for Albanian, Macedonian, Bosnian and Serbian currencies. If you do end up with a handful of unwanted bank notes, try and exchange it with other travellers that are headed there. 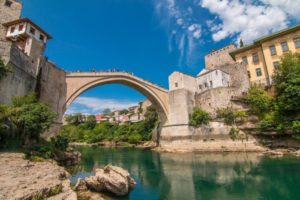 Something worth noting, however, is that countries that have seen a large increase of foreign visitors tend to have prices that mirror those of Western Europe. Croatia and Slovenia, for instance, are the most expensive countries in the Balkans in which to travel, due largely to the fact that they are members of the European Union. Cities like Bled, Slovenia and Dubrovnik, Croatia are notoriously pricey and it can prove more challenging to maintain a tight budget while travelling there.

One of the most important things to remember during your Balkan travel is that unlike the rest of Europe where trains tend to be more efficient than buses; in the Balkans buses are nearly always the best way to get around.

This is particularly true for Albania, Bosnia, Croatia, Serbia, Kosovo and Macedonia where the train network is practically non-existent. While there are some trains in Bulgaria, buses tend to be cheaper, more comfortable, and often times faster — particularly in the summer months where air conditioning can be a welcome relief from the Balkan heat.

When travelling across countries in the Balkans, it is worth considering taking a private shuttle bus which can be slightly more expensive than a public bus, but often have fewer hassles as they drop you off door-to-door and have fewer people that need to get across the border. 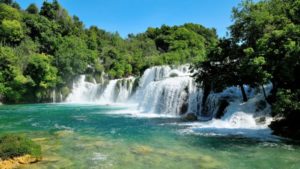 Accommodation in the Balkans, especially in the bigger cities, is rampant. We stayed mostly in hostels and, occasionally, a budget hotel. There are myriad Balkan hostels to choose from and they’re especially great if you’re travelling solo or on a tight budget. It’s always best to book directly with hostels as many offer a discount if you do so.

If you’re planning on staying at hostels in several countries, you can save some money by staying loyal to one of the hostel groups such as the Balkan Backpacker or Balkans Best Hostels, who offer discounts if you stay at several of their hostels — if you book directly.

One of the best things about accommodation in the Balkans is that many places are often run by local staff who have a wealth of knowledge of their respective regions. Speaking to staff is a great way to get a lot of insider knowledge about your destination and find the best local spots! If you want a truly local experience, consider staying in an Airbnb. This can often be one of the most affordable accommodation options in the Balkans and can give you a great perspective on the local area.

Theoretically, every country in the Balkans has its own separate language. In practice, however, many of the languages are quite similar. Serbian, Croatian, Bosnian and Montenegrin all stem from Serbo-Croatian, which is a Slavic language that was spoken when these countries were united as Yugoslavia and are essentially the same language. Bulgarian and Macedonian are also both Slavic languages that use the Cyrillic alphabet, whilst Albanian is a completely separate language that shares no similarity to other Balkan countries.

When travelling through the Balkans, English is widely spoken in tourist areas and most younger locals will have learned English as a second language in school. Older people from Bulgaria and former Yugoslavia might speak some Russian whilst in Albania, Italian is common as a second language. While you can get away without speaking much of the local language, you will be greeted warmly by locals if you learn some basic words! 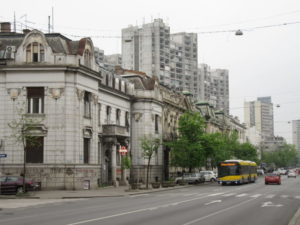 These days, violence between religious groups is rare, however, there are undoubtedly still tensions and scars from the Yugoslav wars of the 1990’s. It’s best to avoid getting into in-depth conversations about religion if you’re unsure how the person might react.

Sampling the local food and drink is one of the best things about Balkan travel. While the nuances of regional cuisine can vary from country to country, there are many dishes and one specific drink that are rampant throughout the Balkans.

Something to keep in mind when travelling in the Balkans is that it is a very meat-heavy culture and it can be extremely hard to maintain a vegetarian diet while still trying to eat like a local.

It became something of a running joke between us during our travels that our meals would largely consist of meat stuffed with cheese stuffed with a different kind of meat. Oh, and with about half a kilo of raw onions on the side!

Despite their love of animal flesh, Balkan cuisine is flavourful and diverse. Food in coastal Croatia and Montenegro, for instance, relies largely on their resources from the Adriatic sea and therefore can seem more akin to Italian food rather than that traditionally associated with “Eastern Europe.”

Food in the central Balkans, however, tends to be where the meat-loving stereotype reigns supreme. Ćevapi, the national dish of Serbia, is a kind of caseless sausage — small cylinders of grilled, ground meat — typically served with a pita-like bread, kajmak (a Balkan farmer’s cheese), onions, and sometimes yoghurt and salads. Pljeskavica is another prime example of the Balkan meat fetish and is essentially a regional take on a hamburger.

The most likely constant you will encounter in Balkan cuisine, however, would have to be rakija. A local take on a fruit brandy — often times made at home with anything from plums, peaches, and grapes — it is customary to offer a small glass to visitors. If you stay at locally run guesthouses or hostels, you will almost certainly be offered this intoxicating liquid and it’s important to know how to drink rakija like a local! 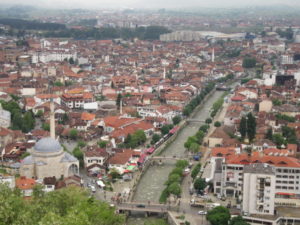 Balkan travel is safe — safer, in fact, than much else of the continent. While instances of petty crime in crowded areas and around bus/train stations do occur, travellers are statistically more likely to be robbed in Paris than they are in Belgrade.

For the most part, if you practice basic common sense — ie. not flashing around cash or valuables — you should have a carefree Balkan travel experience. That being said, take some extra caution when it comes to taxis. It is wise to know which companies are more trusted, make sure the cab is metered (and that the meter is running!), or agree upon a fixed price before entering the taxi. Also, retrieve your belongings before paying cab fare!

A special mention regarding Balkan travel safety goes to the Budapest-Belgrade night train. This train is notorious for bag-snatchings and we have heard personal accounts of such robberies happening. Our first piece of advice would be to opt for the day trains (two depart daily), but if you are set on the night train, then bring a bike lock to secure your bag to your seat and try to keep it out of sight. If you follow these precautions, you will most likely disembark from the train with your backpack and all of your belongings.

Another thing to consider when travelling in the Balkans is travel insurance. We personally used World Nomads for our Balkans trip however it’s important to read the policy details to ensure it’s right for you. 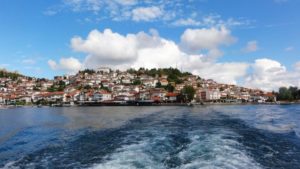 Language: Bosnian (a variation of Serbo-Croatian, uses the Latin alphabet)

Language: Albanian is most common, though Serbo-Croatian is also an official language

Language: Montenegrin (Latin and Cyrillic alphabets both used, though Latin is more common) 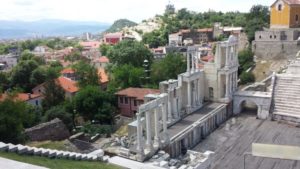 When it comes to Balkan travel, it can be hard to know where to begin. Each country in this fascinating region is unique and deserves to be explored in its own right. Travelling in the Balkans is an amazing way to experience a side of Europe away from the typical tourist or budget backpacker trail!