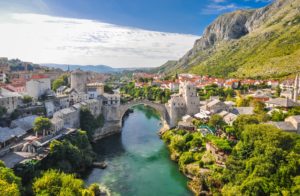 The Stari Most (Old Bridge) on the Neretva in Mostar, Bosnia

Your timing couldn’t be better. Countries that were once hard going have oiled the infrastructure and rolled out the welcome mat. Cities that once made headlines for all the wrong reasons are now impressing with their diversity and authenticity. Landmarks that were all but obliterated in the 1990s – like Mostar’s iconic 16th-century stone bridge and Dubrovnik’s Old Town walls – have been painstakingly resurrected. Beyond the sights to be seen, though, it’s the unabashed hospitality that makes each day spent in the Balkans surprising. A quiet lunch by yourself can quickly morph into dinner by the seaside with enthusiastic locals who won’t hear of you not trying everything on the menu. This is a region brimming with fresh adventures that are more accessible than ever before.

Rocky mountains and terracotta towns plunge spectacularly into the Adriatic Sea along the Croatian and Montenegrin coastlines. Parts of the Balkans have been luring outdoor adventurers for centuries, but some pockets are only now being added to adrenalin junkies’ do-before-you-die lists. Dramatic landscapes like Albania’s and Macedonia’s ominous mountain peaks are made for hiking and biking, and there are wild rivers to raft in Bosnia & Hercegovina, Serbia or Slovenia. For those who would rather just absorb the great outdoors than set out to conquer them, some of the boat rides in the Balkans glide you past idyllic scenery incomparable to any in the world.

Though change is coming on quickly, timeless traditions and cultural customs aren’t falling by the wayside. Blood feuds in some parts aren’t as ancient as they ought to be and pastoral scenes are still as home-grown as they ever were. It’s a region where you can barely keep up with the nightlife, but still get stuck behind a horse and cart. Urban landscapes are a pop-up book of ancient architecture on a grand scale, and winding Ottoman streets are punctuated with Austro-Hungarian villas and the occasional communist concrete block. Throw in Roman ruins and a Venetian facade, then wrap it all in a medieval wall and plonk it by the sea. History isn’t just ancient in the Balkans, it’s epic. This was the battleground and resting place of the Byzantine, Ottoman and Austro-Hungarian Empires; a stroll through town can evoke the rise and fall of civilisations.